Hello gang, it’s time for me to tell you about my new book because it is my article and I want you to buy stuff! 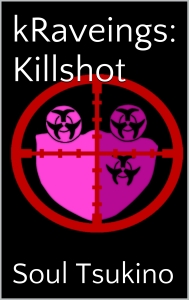 kRaveings: Killshot is the fourth book in the kRaveings short story series. In this installment the cybergoth hero kRaven and the spirit Mirakoshi are still head deep in the murder of Missy Horgenstern. In an attempt to cull the underworld for clues as to the mysterious suited men who tortured and murdered the young woman, the stumble into something a whole lot bigger than kRaven or anyone else expected.

This book, like the other kRaveings offerings are only 99 cents and are available at Amazon, Barnes and Noble, and Smashwords NOW!

You can see my published work HERE

You can see my work for Japanator HERE and Tomopop HERE

and remember, I’m STILL a candidate for President of the United States in 2016!

Posted by soultsukino on August 2, 2016 in Soul Tsukino and tagged But my book damnit!, Damn Write, kRaveings: Killshot, Soul Tsukino.