Where we love is home. Home our feet may leave, but not our hearts -Oliver Wendell Holmes

It’s that time of year again to visit my home convention of ANIMAINE in South Portland, Maine. As always we were located in the Best Western Merry Manor Inn which is a nice little hotel and convention space in South Portland. This year’s theme was Villains and Vengeance. Our convention mascot Malika was decked out as a villain for this year’s gather, with me cosplaying as my books character’s kRaven and Mirakoshi the superheroes, just made things more fun. Buy my books to see I’m creative, not crazy!

My best friend and I were up VERY early and got going around 9 am to get food and supplies before making our way down south of us for the hour drive. We visited the Dollar Store, The grocery store, got the car filled with gas and drive down. Between being sick, and a shooting incident the Monday before this convention down the street from my house, this left me a little frazzled in the old brain of yours truly, but it would be all right. AniMaine makes it all better. That is what they do. That is what WE do.

We stopped around South Portland a bit, the Wal-mart there where there was a HEARSE parked right in front of us, THAT wasn’t eerie after the week we’ve had.

and the local Asian market, The Veranda, before going to the hotel and checking in (great front counter BTW) and getting settled in the hotel with all the luggage and such. While my buddy went down to the subfloor to get his badge, I went a different area to get my press badge on the main floor. I ran into one of my con friends and talked to them away from the action for a little while before reconnecting with my travel partner. We caught the panel hosted Voice Actor and AniMaine regular and legend Greg Ayres. If you are familiar with him, he is an amazing voice actor convention guest and has plenty of stories from his work in the business and conventions to fill a whole weekend. Lots of stories and fun with Greg once again, especially with him coming from a part of Texas that was really hit by the hurricanes. Coming to Maine where we’ve had a week of high winds and arts of the state with no power for days if not weeks. Great guy.

We killed some time in the main room, the Gaming Lounge 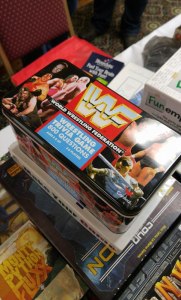 and Artist Alley before moving to another room for “An hour with Anthony Bowling. Anthony is a new guest for the con, and besides being a director for anime dub productions, he’s a voice actor with such roles as Ukyo and the Emporer in Samurai 7, Gido in Toriko, a number of other credits. He was joined by voice actor and director Jeremy Inman and man these two made a great duo. Funny as hell and talented too. They, along with the both of us, moved downstairs to the infamous “Underground” room (it’s the room directly under the second floor large room) for “Anime Directing and Why you should care.” Which, with these two, made for another fun hour of what it’s like to be on the other end of the sound booth and what goes into an aspect that isn’t touched on a lot in conventions like this., also, a lot of cow and shrimp jokes and puns if you have seen the roles they have played. Mooooving stuff!

The next destination was “I’m Not Gonna Lie”, an AniMaine original game show pitting some of the crew and guest on teams of three to see who can run the biggest line of bullshit in a believable way, or run a line of truth that no one would believe. Con-chair Colin Harvie, Greg Ayres, and staffer Michael Churchill against AniMaine co-founder Arthur Babinsky, Jeremy Inman, and Anthony Bowling. There were stories of cereal, 60 pounds of FRENCH MEAT, a drunk monkey uncle named Sipsip, and I am not going to tell what was a lie or the truth because I don’t think I remember which was which and you probably would not believe me if I did tell you.

Some more milling around and checking out the Dealer’s Room before Con Chair Colin Harvie unleashed some dark world nightmare Neo Genesis Evangelion “adult material” that we just all laughed at and made fun of. Bizarre shit that would mess with your head.

With that, l we called it a night for the first day of the con before going up to our rooms and tried to sleep. *laughs*