My one day to the AniMaine convention!

Friday morning pretty much started with me getting a shower and some breakfast. It is usually an hour away but with the con starting at noon and us not stopping anywhere before the convention, myself and my friend Jeremy took our time and didn’t really rush anything. Unfortunately, it is Maine and November so as I was getting ready it starts spitting snow outside and it was getting colder. Thankfully I didn’t slip on the stairs to my house as they were covered in ice.

We stopped at the local Walmart to get some sodas for the day and this is when I find out there is something up with my bank’s card. Wonderful. I had some money on me, but most of my savings for the weekend wasn’t going to happen. Never the less we made the hour drive to South Portland and right into line before getting registered and I got my press pass for the day. It also gave me a chance to personally thank Greg Ayres for some of the things he has said over the years and about a friend of ours. It is always great to meet Greg Ayres and he seemed to be doing good and he told me the news that his brother Christopher (The voice of Freiza in Dragonball Z) who had been through a double lung transplant recently. Greg gave me an update on that and Both seemed to be doing pretty good.

After some milling around, we opened up with Opening Ceremonies and the introduction of the gusts of the con. It pretty much was just an introduction to the entire weekend along with the people you would probably see. Since I was only doing the first day a lot of the stuff mentioned went over my head but it was still fun.

With that letting out we went to the room hosting Q&A panels first from voice actress Lauren Landa (who kinda requested we not take any pictures during the panel) and then from voice actress Megan Shipman. Both were fun to listen to and gave tips on making it as a professional voice artist. Very Awesome.

Nest up was an uplifting panel from AniMaine veteran Greg Ayers and his story of getting into Animal Crossing during a bad time in his life and how video games can be a big part of people’s lives. It was really empowering and made for a good time.

After that panel, we both went down and killed some time in the exhibit hall. I got some cool cosplayer pictures and even got a shirt for the convention with money not involving my bank card. They went to Pink this year! Very Cool! 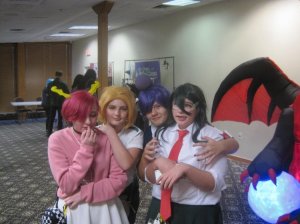 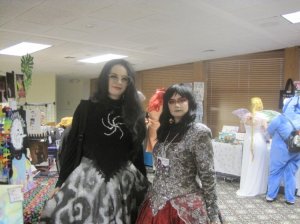 Greg Ayres was back for his “adult” themed panel and the less said of the goings-on there the better. We were carded for that room for a reason. We finished off in the same room with the tradition of “Would I Lie?” Guests and some of the staff were split up into teams and told stories with the opposing team trying to figure out if it was a lie or if what was told actually happened. The stories that were the craziest were the ones that were actually true.

When that let out it was pretty late so we said our goodbyes and got into the car for the hour drive back home and as it was past midnight at the point I went right to bed. My back was killing me at that point so sleep was good.

So yeah, the convention was amazing even if I only went for one day this year. AniMaine is always fun and I recommend it to everyone!