This game show is a lot of fun!

I hope you are doing okay during this social distancing and what is left of these “Stay At Home” order. It sucks but those are the rules. It’s driving me nuts but I will live.

One of the new things I have grown to really enjoy is the Buzzr network showing the old Concentration game show. I remember the Alex Trebeck version in the ’80s and they are showing those too. Weirdly that version is called “Classic” Concentration. but the network has know been showing the older show and I love it! 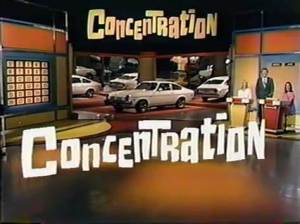 Since this is from the early 70’s the game board is a bit more “old school” with the little numbered squares actually turning on the board instead of some computer-animated action like in the Alex Trebeck version. This also created a few “accidents” where the wrong square got turned and a few times where things got stuck. Makes things seem more “real” that way. Not that it matters THAT much but it adds to the quality of the show. It makes it more fun in a strange way.

One thing the older show has that the “classic” version doesn’t do is the “bonus” round. After solving the regular puzzles, they play a bonus round where the contestants try to match two squares of different types of money. Fracs, Yen, Rupees, those kinds of things. It is a neat aspect as different types of money and what country they come from are announced. It also helps that how much that amount of money is in American dollars is told to the players and the audience as well.

I’m only guessing but I figure this is from the syndicated version of the show between 1973 to 1978 with Jack Narz as the host. It looks every part of the ’70s and there isn’t much of a problem with that from me. It makes for some fun TV watching at 7:30 at night.

I hope you do well and see you next time!